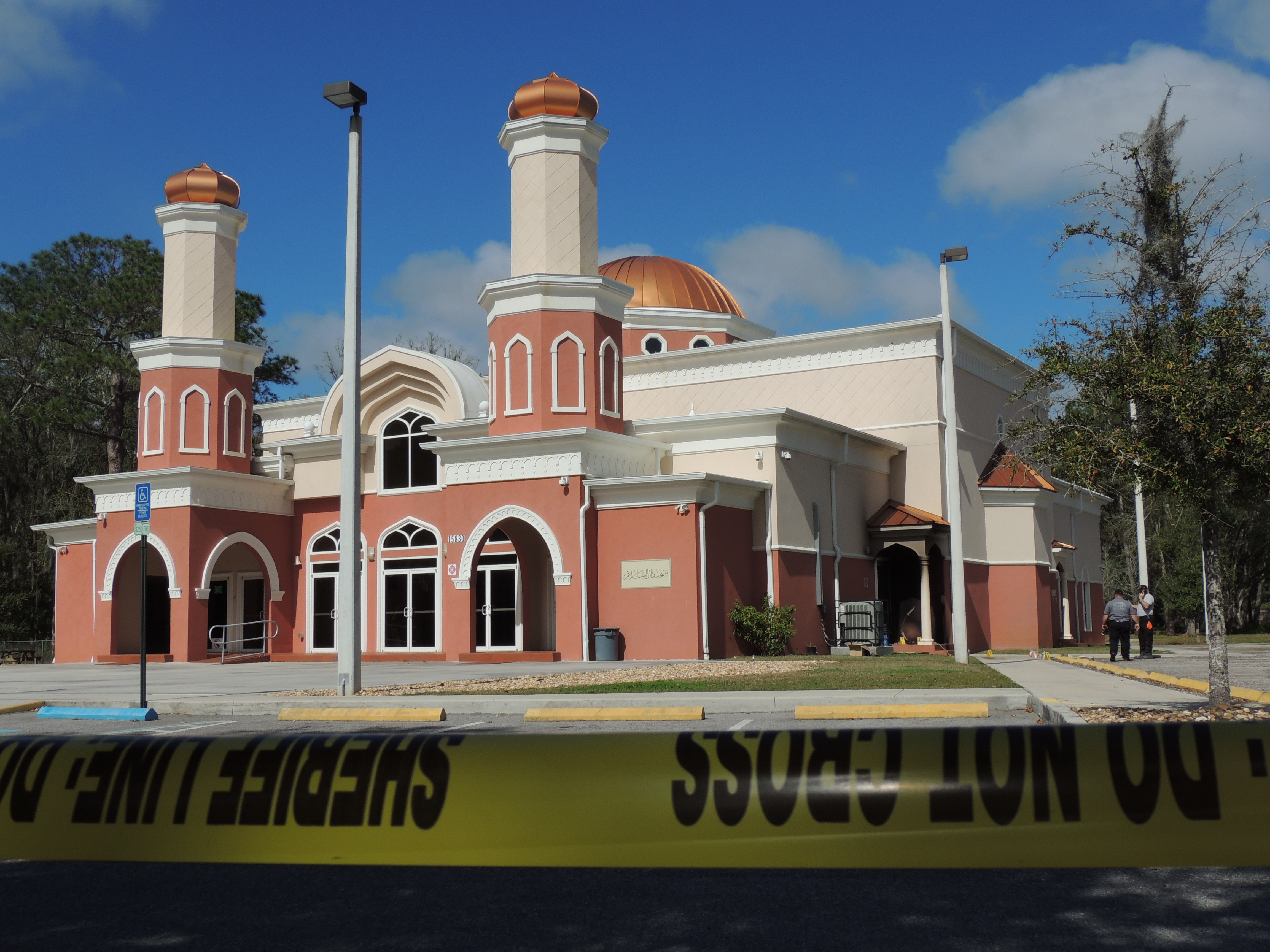 In a news release, Hillsborough County Fire Rescue said an intentionally set fire damaged a prayer hall at a mosque early Friday in Thonotosassa just outside New Tampa; the mosque arson is also being investigated as a possible hate crime.

At a press conference, Tampa Mayor Bob Buckhorn urged people to reject the wave of Islamophobia and anti-Semetic attacks across the country.

“First of all, As-salamu alaykum.”

“To our Muslim friends and neighbors and brothers and sisters and community members. I am here for a very simple reason and that is to let our Muslim friends know that this community stands in solidarity with them. That whatever happened here–and we don’t know–and I have the utmost confidence in ATF [Federal Bureau of Alcohol, Tobacco, Firearms and Explosives] and the Hillsborough County Sheriff’s Office, that we will determine what happened here. But, we do know that it was arson and we do know that a house of worship was targeted.

“This is no different than the wave of anti-Semitic attacks on Jewish community centers and synagogues and bomb threats that have been called in, all across the country, including in Tampa, over the recent months.

“This is a community that celebrates the diversity of this amazing place. The plethora of religions. The gods that we worship. This is a community that will never demonize anybody for any reason and so we stand together, as a community. I may be the Mayor, but, there are tens of thousands of Tampanians, who do not happen to be Muslim, but, today stand with our Muslim community and say ‘Not on my watch. Not in my city. We will not tolerate this. We will stand up in the face of opposition. We will stand up in the face of anybody who would choose to demonize anybody for any reason, specifically and directly because of their religion. This is America. Our America. Their America. We don’t tolerate that.’

“So, whatever occurred here, we will find out. The perpetrator will be punished. But, we cannot allow, as a community, anybody to be victimized, to feel vulnerable, to be attacked for any reason. Whether rhetorically, whether it [be] through a Presidential Order; whether it’s an arson; whether it’s a hate crime; whether you’re Jewish, Muslim or Catholic, we stand in solidarity with all of members of this community, because ultimately, they are Tampanians first, they are Americans and as Americans we stand together.

“So, let’s figure out who did this, but, most importantly, let’s support our Muslim friends and neighbors in this community.”

A reward of at least $5,000 is being offered by the Council on American-Islamic Relations (CAIR) for information about who set the fire at the Daarus Salaam Mosque.

“So, early this morning we received a fire alarm that there was a fire at the mosque. When they responded–we have the Hillsborough Fire Marshall who is taking lead of this investigation–they have stated that it is an arson investigation. The investigation is early on, so we don’t know the motives or have a potential suspect, but, they are collecting data today and evidence in hopes of trying to figure out what happened here and bring this individual into custody.”

Journalist: “I’m specifically curious about the details, because I didn’t catch them all, with the holes and the glass. They are not bullets, but, explain what happened.”

“At this point, what we know from talking to investigators–again, we gotta remember the investigation is very, very early on–but, the bottom line is that they don’t have any evidence that it was a firearm. So, in other words they don’t have any shell casings, they don’t have anything to indicate. They are saying that because of the glass, the fire, the heat, that might have caused those dents on there. It might have been a person causing impact, but, again it’s too premature, we’re only speculating.”

Journalist: “So, was the fire started outside?”

“The fire did start outside. Primary damage is to the outside of the building and then extensive water damage from the sprinkler systems themselves.”

Journalist: “So, did fire get through those holes?”

“We do have water damage, correct.”

Journalist: “But, no fire damage.”

“Correct. It’s outside. Of what you can see, you can actually see kinda the wall and the smoke and all that stuff from the fire itself.”

Kinane: “I’ve had people asking about where the worship will be today. Is that something that you –”

“I think we’re going to be talking to some community partners on whether we do it here, on site. I think Jummah and the spirit of the fact that we’re gonna continue to celebrate this holy day, will move forward today. Then it’s just gonna be a matter of that location that will be shared with the community.”

Journalist: “Last thing to you–I asked this earlier, but, want to get it again–what’s your message to the person or persons that did this?”

“Again, I think there’s not really any words you can really express to these individuals other than ‘You will be held accountable for this.’ This was a crime, whether it’s gonna be dubbed a hate crime or not, we’ll wait to find out. But, either way this was a crime and you will be held accountable. It’s not enough that you committed such an intolerable act, but, the fact that you actually did this to a place where many people come to worship and feel safe, just makes it that much more horrendous.”

There’s a Facebook event called “Stand up with New Tampa mosque!” calling for an interfaith gathering there Friday at 7:00 p.m.  “to show support and solidarity.” The address is 15830 Morris Bridge Rd, Thonotosassa.