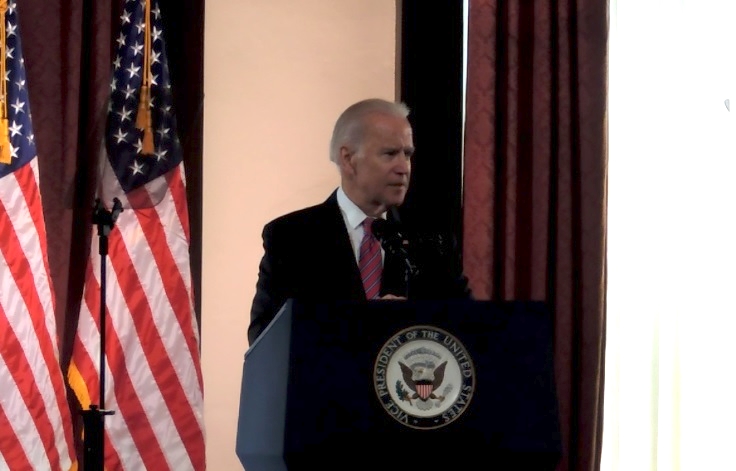 Vice President Joe Biden spoke at the University of Tampa Wednesday afternoon about the U.S. and its relationships with countries in the Americas. Biden stressed Tampa was built by immigrants, many of them from Latin America, including Cuba.

“I know how many of you have closely have followed our opening with Cuba. It’s been mentioned already. And, not just because the Tampa Bay Rays beat Cuba 4-1, in March. Not withstanding that, is we’ve actually created new opportunities for US business and an emerging Cuban private sector and it’s engendered greater personal connection with the citizens of Cuba.

“And here’s the thing, I’ve had a chance to meet every leader, of every country, in the hemisphere, and the single act–beginning a normalized relationship with Cuba–has lifted an enormous burden off of them. Allowing them much more flexibility to deal with us, as they want to do. It’s had multiple benefits so far. It’s paid important foreign policy dividends.

“We still have real disagreements with the Cuban government about it’s denial of basic freedoms to its citizens and we’re gonna continue to raise these issues and stand up for the protection of human rights.

“I was asked to speak to the OAS when we were in the process of moving forward and I said to them, quite bluntly, ‘We’re doing what you wanted us to do, and it’s the right thing to do but, now we expect you to speak up when we talk about the violation of human rights. You all must be part of making sure that this reform, ultimately takes place.’

“But, shifting from isolation to engagement proved that our promise to listen, rather than dictate to the region was more than just words.”

Biden spoke at an event for the Greater Tampa Chamber of Commerce. He praised a recently-finalized trade deal that is opposed by many labor leaders and environmentalists, the Trans-Pacific Partnership (TPP).

“And the Trans-Pacific Partnership we negotiated counts for 30% of all the global trade in the world, 40% of the global GDP and 50% of the projected economic growth in the world. We’ve done this all while insisting on a new international Norms and Standards for worker’s rights; for environmental protection; and the protection of intellectual property.

“We’re already beginning to see the impact of these tightened regulatory standards for those who wanted to be a part of it. Mexico has just announced an unprecedented change in their labor laws, including their constitution.”

“CENTCOM is gonna have a lot less reason to have to invest as much as we’ve invested over the last 40 years. It’s not going to be the Arabian peninsula, not Russia, not Iran, not Nigeria, not Venezuela–North America, Canada, United States and Mexico and this shift has unlocked significant opportunities: reducing our trades deficit; giving us greater flexibility in dealing with other oil-producing states. Not many nations have leverage over us anymore. And this increasing energy trade in the hemisphere, bolstering the energy-security of our closest neighbors.”

Listen to the full speech here:

Watch the first half of the speech here:

Watch the second half here: