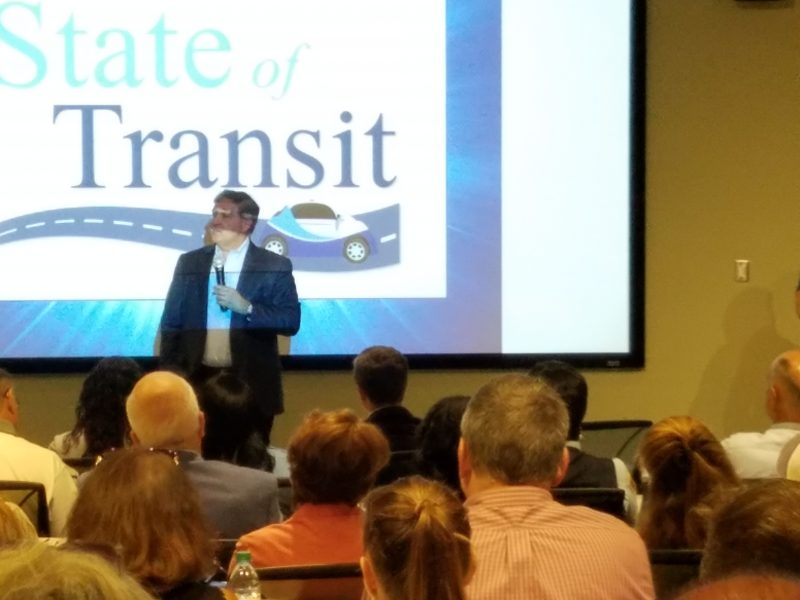 In order to attract major companies to a growing Tampa Bay region, high-quality transportation options are needed; that’s according to Tampa Bay Lightning owner Jeff Vinik. But when WMNF News asked him the best way to pay for it, he wasn’t specific.

“My message right now is that we’ve got to continue the process of examining all of our options.

“A hard study, as you know, is going to be underway–funded by FDOT–looking at transportation here on a regional basis. Another study is underway looking at the streetcar and ways to extend that and move people around within the Tampa area better.

“So, again all options have to be underway as we examine all different modes of transportation to see what makes the most sense for this city and this region twenty, thirty, forty years from now.”

When a highway-expansion project called TBX came up for a vote at the Hillsborough MPO last summer, Vinik’s development team spoke in favor of it.

Tuesday morning Vinik spoke to a transit forum in Tampa, near a major downtown development he is planning. During his presentation, Vinik talked about how population growth could make the Tampa-Orlando super-region one of the top five economies in the country.

Another speaker, Republican State Senator Jeff Brandes says the future will combine what seem to be two of his favorite topics, autonomous vehicles and ride-hailing apps like Uber.

“This type of innovation; when you think about Uber and Lift, without a driver in the vehicle and I can provide you that transportation for $0.40 or $0.50 a mile, that’s cheaper than I’ve ever been able to provide human transportation in the history of time.

“Any time we talk about transit options or transportation options in the future, we have to understand that this is going to be bigger than the smartphone; that this is going to change our cities because we’re going to recapture all these parking garages and their going to become usable portions of our downtown. When we’re talking about road infrastructure and bridges that we’re going to build, we need to think about this technology has the opportunity to double or triple capacity of existing infrastructure.”

Brandes also thinks electric cars will be part of that future and that means transportation funding will have to rely on something other than just the gas tax.

The Tampa Bay area needs a regional plan for transportation, not a series of plans for each county; that’s the opinion of HART CEO Katharine Eagan, who spoke Tuesday morning as part of a “State of Transit” forum branded #BeyondTheBus.

“We’re all familiar with TBX, right? I am going there, I know, I heard that. (laughter) You don’t have to like it to acknowledge it’s changed how we’re talking about transportation.

“A year ago we weren’t having big community conversations about how to connect the (Tampa) Heights and the University area over to the airport with buses, not just because of maintenance of traffic during construction, but, because people want out of their cars. They want options. They want to finish watching Stranger Things on our WiFi so they can get to where they’re going. They want new choices.

“HART is a partner. HART’s been at the charettes and HART will be there, literally on the street, with the service to keep you out of traffic, when all of this is going on.

“Again, beyond the bus, but it’s transit, it’s all pulled together.

“Regionally though, we’ve got TBX–our big program–regionally we’ve got studies we’ve done in Hillsborough. We have the 2010 HART Alternatives Analysis. Pinellas has a 2014 study. My life doesn’t just live in one county, does yours? (crowd slowly responds) You guys have been sitting still too long. (laughter) We don’t. We’re regional, right? So, it’s time to take our smaller studies, knit them together and come up with a regional view of premium transit.

“And I’m pleased to announce that next month the HART board will award a premium transit study with an implementation or a start date of October 1st. For us bureaucrats, ya’ll – this is fast.

“Eighteen to twenty-four months later we will know what the next steps are, we’ll have corridors and we’ll be talking about a whole bunch of different technologies for a regional solution. Regional solutions for regional lives.”

Eagan spoke to a standing-room-only crowd in downtown Tampa at the USF health CAMLS facility.