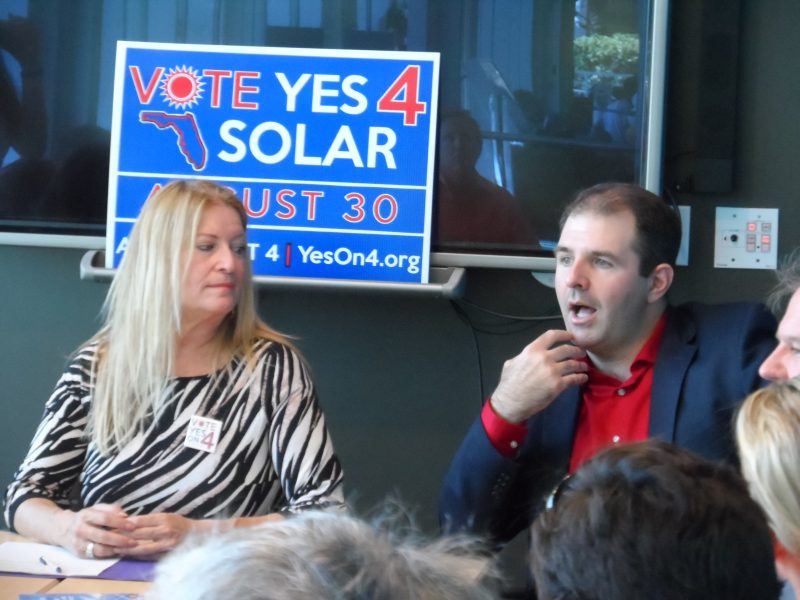 Florida voters are deciding this month whether to add a business tax break for solar power to the state constitution.

Wayne Wallace is president of Solar Source, a Largo company that installs solar panels. He recommends that people vote “yes” on Amendment 4.

Listen to the full story here:

“People ask us all the time: ‘Why isn’t there more solar in Florida?’ Well, there’s been a host of barriers. And one such barrier is, ‘Hey, you know we want to generate home-grown jobs, we want to save our customers money’ and to do that, people shouldn’t be burdened with taxes if they want to save money on their electric bill.

“So, Florida could be a leader in solar energy; we have the sunshine, we just don’t have the policy. This ‘Yes on Amendment 4’ would be one of the barriers that could be certainly removed to help expand solar energy in Florida, create more home-grown jobs.”

Wallace spoke Tuesday morning at the University of South Florida St. Petersburg as part of a solar roundtable organized by supporters of Amendment 4.

Two arguments against the Florida solar amendment on August’s ballot are that by giving tax breaks to businesses that add solar products, either the tax burden will shift to individuals or government services will need to be cut.

But Wallace says the benefits outweigh the costs.

“That is a criticism and I can understand that. Although, here we export north of $60 billion annually for natural gas and fossil fuels–coal–to keep the lights on. If we could keep some of that $60 billion here, in Florida, and put that into jobs, now we have a higher economy, we have more people working–these are high-paying jobs–and it helps the local infrastructure for people to go buy within the community.

“Keeping that money here and finding a different way to move around those funds. Yes, some of the taxes are gone, but, why tax solar energy when we can keep the money here and have home-grown, local, jobs? We’ve got to find a better way.”

Another Amendment 4 supporter, St. Petersburg City Council member Darden Rice, might have to find a way to deal with reduced tax revenues if the solar tax cut passes.

“I don’t agree with that argument as being a reason for not adopting this.

“First of all, we are collecting plenty of ad valorem taxes and tangible taxes from these businesses. Why would we tax the sun? By taxing solar devices, it adds up to $.05 per kilowatt, per hour of generating solar power.

“So, this amendment offers potential huge savings and incentivizes the use of solar power and it saves us money in the long run. That means it’s less money for building more power

“When you look at the whole picture–this incentive to go solar–is entirely the right thing to do from a business expense and by bringing in and attracting more businesses that can save money through this; that provides jobs to our area and that only means good things.

“I think that anyone who’s worried about not collecting ad valorem taxes on this–it’s just really not a strong argument against this, it’s very short-sighted.”

Rice supports August’s Amendment 4, but opposes the solar measure that will be on the November ballot.

“The August Amendment 4, which we’re voting on next week, is the good one: vote yes. The one in November: vote no. It’s a bad solar amendment. It’s a sneaky amendment, put forth by utilities.

“Essentially what it would do is–the November, the bad one–it would do away with net metering. That would make it very difficult for people who are generating solar power to sell it back on the grid and it just takes away one of the biggest ways that solar power can gain a foothold, economically in this state.”

The Republican-dominated Florida Legislature put this month’s Amendment 4 on the ballot. Many conservatives, like Tori Perfetti with Floridians for Lower Energy Costs, like the tax-break aspect of this amendment.

“We believe in free-market policies that can advance different energy options for all citizens to have better control over their future. So, if you can lower your costs of your home or your business, you can do it without mandates or subsidies, it’s a net benefit for everyone.”

Others at the roundtable said they support Amendment 4 because it will contribute to cleaner air, reduce greenhouse gas emissions and save businesses and consumers money.