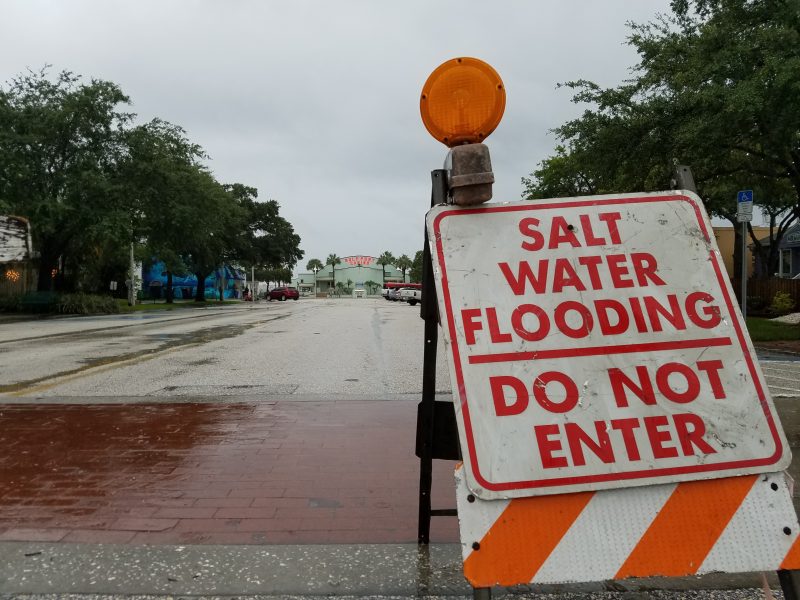 On Thursday Hermine strengthened to a hurricane; because of heavy rainfall Wednesday the City of St. Petersburg began what it calls a “controlled wastewater discharge into Tampa Bay.” The city says based on previous releases “90% of the discharge is expected to consist of rainwater/storm water.” But St. Pete Mayor Rick Kriseman says the amount of discharge near Albert Whitted Airport won’t be known until after Hurricane Hermine passes. 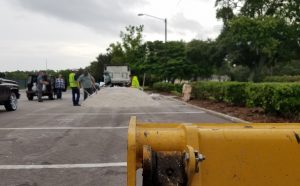 “First off, we’re at Bartlett Park right now and what we’ve got going on is sandbags for anybody who needs sandbags, if they’ve got some concern about water intrusion into their home. Come on out here. Our staff are doing a great job filling these things up and getting them loaded into cars.

“Out in the Lake Maggiore area, we still have a lot of flooding and we want to encourage people to try and stay away from bringing their vehicles into this area. We don’t want any people getting hurt or getting stuck. There is some other flooding, especially as tides rise. The water receding doesn’t happen as quickly, so, there’s going to be some areas in the northern part of the city where you may see some flooding.

“So, again, if you don’t have to drive through those areas, we’re encouraging people not to do that. If you do have to, please take it slow, because the wake that you put out may be the wake that goes into someone’s home and we don’t want to see that happen.

“Forecast is calling for some additional rain, potentially this afternoon. Rains we had yesterday were some of the largest we’ve ever had. It was a lot of rain. City staff and public works and all of the departments, I think, have been working hard to try and do everything they can to keep sewage out of the streets and into people’s homes and keep our system operating as efficiently as we can. We’ve had to do a little bit of discharging, predominately rain water, since that’s been what we’ve had a lot of. But, we’re doing everything we can to manage this storm to the best of our ability.”

Talk more about the discharge. Do you have an idea of how much its been and where it’s being discharged?

“At this point in time we have no numbers and we won’t have them, really until this whole event is over. We don’t want to put any numbers out that aren’t accurate. It’s been predominately up in the Albert Whitted area. We were able to, through a lot of hard work, get a couple storage tanks in the Albert Whitted complex, with 3,000,000 gallons of storage online two months earlier, so that’s helped mitigate the issue. Some of the investments that we’ve been doing have also helped out. But, again, when you get a significant rain event and the numbers that we saw yesterday, there’s just a limited amount of what you can really do.”

What kind of numbers are you talking about? How many inches in St. Pete?

“Goodness. I’ve heard anywhere from 9-inches to 12-inches, in that range. It’s just been a lot of rain.

“We’re not the only ones getting hit by this. Every community in the Tampa Bay region, right now, is dealing with this. I know Largo, Gulfport, St. Pete Beach, Treasure Island, Tampa, all of these cities are all having to deal with the systems that are being just completely overwhelmed by the volume of rainwater.”

Road closures: I think MLK South is closed–parts of it. Tell us more about where the roads are closed.

“If you go to @StPetePD on Twitter, we are trying to keep updated road closure information. So, I encourage people to take a look at that for the most up-to-date road closures.

“Once you hit around 36th and MLK South, you’re gonna find the road closed because of flooding. I’ve heard there’s, as the tides have been coming in a little bit right now, that there’s some areas that are starting to see some higher water in the Snell Isle and the north side of town. But, again I encourage people to check out the Twitter site @StPetePD.”

I was just driving on 22nd Avenue South, right at U.S. 19 at 34th Street South and I saw water bubbling up through a manhole in that intersection, what would that be?

“That’s the rainwater that’s gotten into the stormwater system that’s coming up. Again, we’re doing everything we can to try and minimize all those things, but, it’s predominately rainwater that you’re seeing that’s bubbling up right now.”

What can people do to minimize their impact?

“If you live in a low-lying area and historically you’ve seen flooding, you may want to consider getting a sandbag if you’ve had water that’s come up close enough to your house where you’d have a concern if we have more rain. Other than that, again, stay off the roads as much as possible and stay out of areas where you see flooding. Don’t take a chance that it’s not as deep as you think it might be.”

And finally, you’ve probably heard from emergency managers. What are some of the wind expectations?

“We’ve been very fortunate, quite frankly, in that the storm took a turn and started heading more northward instead of heading west, which we would have felt the brunt of it. Lucky us for us, unfortunate for those communities that are going to have to deal with this,” Kriseman said.

The City of Clearwater is having wastewater issues of its own. According to an email to media:

“The Marshall Street Wastewater treatment plant influent pump station has experienced mechanical failures and has shut down. The plant treats wastewater and is rated for 10 million gallons per day. We have been receiving approximately 30 million gallons of wastewater per day through this plant due to the heavy rains. The system is now backing up and the wastewater is overflowing through the manholes at locations served by this treatment plant. Clearwater Public Utilities is working on obtaining rental pumps to bypass the pumps that are not working. Crews are going into the streets surrounding the plant and barricading off areas where the manhole covers may be off and wastewater is in the streets. Residents should avoid going down streets that are blocked off.”

The Tampa Bay area is under a Tornado Watch until 11:00 p.m. Thursday evening because of Hurricane Hermine. Earlier on Thursday the Dade City / St. Leo and Spring Lake area was briefly under a Tornado Warning. A different Hurricane Warning applied to the Hudson / Bayonet Point / Hernando Beach area.

In mid-afternoon the center of Hurricane Hermine was virtually due west of the area, about 180 miles from Tampa; a Tropical Storm Warning is in effect for the Tampa Bay region.

Hillsborough, Pinellas and Citrus County schools will be closed Friday. 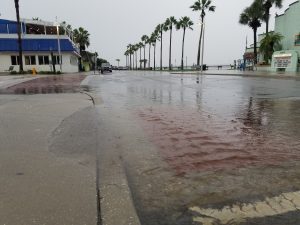 Pinellas County is warning its residents to expect impacts from the hurricane through early Friday, with 4-6 inches of rain forecast, higher than normal tides, and winds of 25 mph with gusts up to 45 mph. Coastal and barrier islands may experience flooding.

The City of Tampa closed Bayshore Blvd. between Platt St. and Bay to Bay in both direction in advance of anticipated flooding.