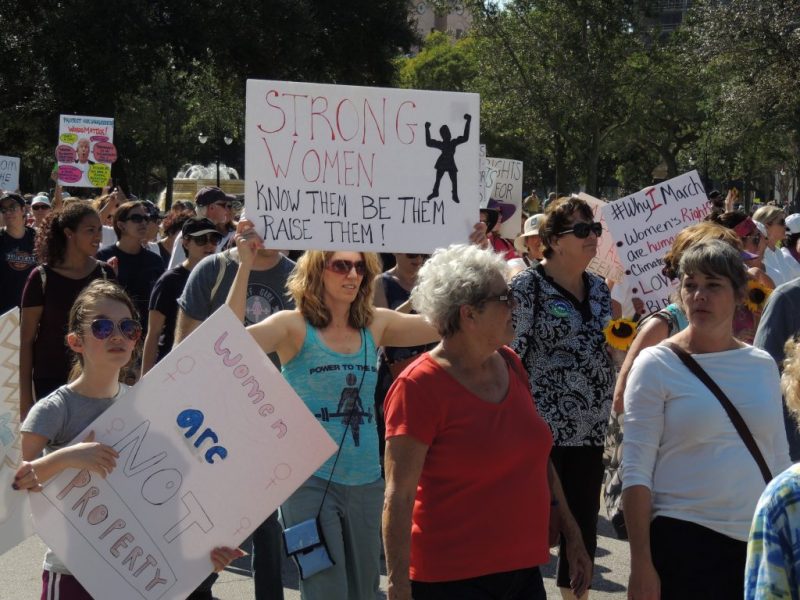 This Sunday is the first anniversary of the massive Women’s Marches that were held across the country and around the world on the day after President Trump’s inauguration; to mark the anniversary, there will be a “Power to the Polls” Women’s March and rally in St. Petersburg, Florida on Sunday afternoon.

WMNF News interviewed one organizer, Lisa Perry, who is with the Women’s March St. Pete chapter.

Below is information about other marches in Florida:

Here is the info for marches in Florida:

TALLAHASSEE
Where: In front of the old Capitol!
When: January 20th, 12:00pm
Please join us for a gathering of activists at the old Capitol in Tallahassee, FL, on Saturday, January 20. Speeches, activist organizations, networking and fellowship.
We’ll gather rain or shine!

GAINESVILLE
Where: Boddidly Plaza
When: Sunday, January 21st, 2:00 pm
Come gather and join others and organizations before concluding the celebration by marching down University to 13th and back.

SARASOTA
Planned Parenthood March Kick Off
Where: Five Points Park – Corner of 1st St. and Central Ave, Sarasota FL 34236
When: January 20th 11:30 AM-12:00 PM
A chance to meet with fellow PP supporters before the March for Democracy to rally around reproductive health! Barbara Zdravecky will be joining us to check in about the curonstate of reproductive health and rights! Wear pink! After a speech from Barbara, we will march together to the Unconditional Surrender statue to join the March for Democracy.
March for Democracy
Where: Meeting at Unconditional Surrender Statue in Downtown Sarasota
When: January 20th 12:00 PM-4:00 PM
Join dozens of progressive Sarasota organizations to stand together for human rights in the state of Florida and across the United States! We will march together across the John Ringling Causeway
RSVP here: https://plannedparenthoodevents.ngpvanhost.com/ngpvanforms/40928

NAPLES
Collier Freedom’s Women Together for Freedom
Where: March will line up at 4:00 pm at the corner of 3rd St S and Broad Ave S in Naples FL. The march will start at 5:30 pm sharp. Rally will start at 6:00 pm. at Cambier Park.
When: January 20th 4:00 PM-7:00 PM
Planned Parenthood will be participating with Collier Freedom’s Women Together for Freedom March.
RSVP here: https://www.eventbrite.com/e/women-together-for-freedom-march-rally-tickets-41737573205

ORLANDO
Orlando Women’s Day of Action
Where: Lake Eola Park 99 N Rosalind Ave, Orlando
When: January 21st 11:00 AM-3:00 PM
Catch Planned Parenthood tabling and rallying at Orlando Women’s Day of Action! Proceeds from the day raised by the organizers will be going to people in areas affected this hurricane season; Puerto Rico, the U.S. Virgin Islands, and the Florida Keys!