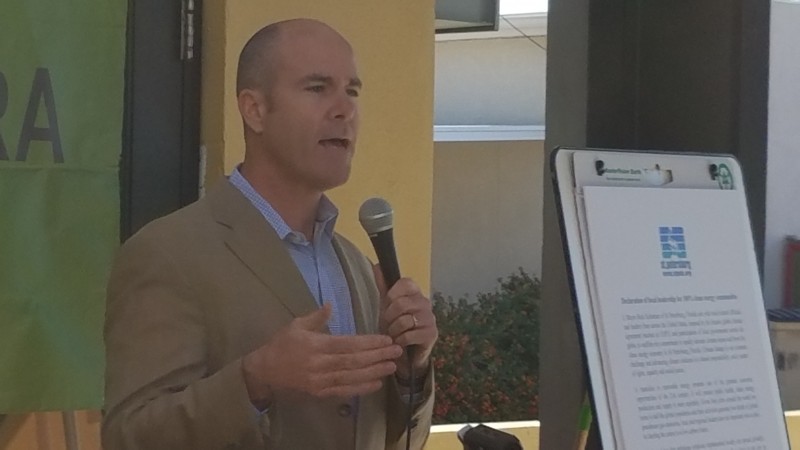 St. Petersburg is the first Florida city pledging to work toward 100% clean energy; Sharon Wright is the City of St. Petersburg’s sustainability coordinator and joined the Sierra Club Tuesday morning to officially launch the “Ready for 100” campaign.

“We’re talking with the business community about opening up their data, showing what their spending on energy so that we can set up challenges and make it a fun community-wide thing.

“So, there’s energy efficiency to start with and then there’s increasing the amount of renewable energy we use. We don’t have hydroelectric, but, it seems like we should probably have solar. And I’m working with – even with Duke Energy right now, to start doing life-cycle cost analysis on various sizes, so we can get to the real ‘on the ground how are we going to do this’ instead of just reading in the paper, over and over again, ‘Oh the cost is coming down.’

“Well, we want to see what it really is, for some of our projects, and how can we be a leader in getting some of those on the ground.”

St. Petersburg City Council member Darden Rice says the city needs to look at the “franchise agreements with utilities that prevent us from innovating.” A representative from Duke Energy Florida was at the launch but would not agree to an interview. Rice also said sustainability needs to be driven “into the DNA of the city.”

“We start looking at policies to green buildings, green fleets, cleaner buses, cleaner cars. Looking importantly at some of the ways that we can innovate, in terms of looking at our contracts with utility companies to see where we can innovate in better ways.

“Well, right now across the country and around the world, we have communities that are facing the effects of climate change in the form of drought or severe wildfires or extreme weather events. But, we also have an enormous opportunity to invest in clean energy, particularly since clean energy like solar and wind is now cheaper than gas, cheaper than coal, cheaper than oil. And so, not only can we save our coastlines, but, we can save our economy and save money in the same process.”

Coastlines are especially vulnerable to the effects of rising seas caused by a warmer planet. A study published in Nature Climate Change last week, found that more than 390,000 people are at risk of becoming climate refugees in Pinellas County by the end of the century if sea levels rise by just under six feet.