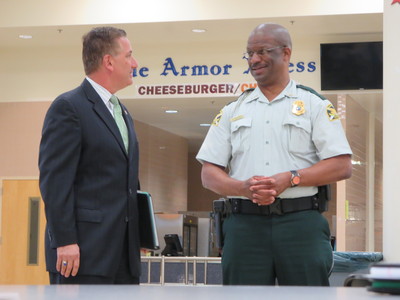 It started with an address, first from Chief of Police Anthony Holloway, then the mayor, Rick Kriseman. The chief listed off a series of ideas, taken from earlier meetings. Things like keeping a database of why and how often people are stopped and requiring patrol officers to get out of their cars and instead walk and talk with residents. Holloway said the city’s high school program could give students college credit and a leg up on entering the police academy.

After a 2 minute PR video from the police department, about 50 residents and 40 or so police officers gathered at various tables in the cafeteria for discussions. Some tables had local politicians like city council members. Chief Holloway and Mayor Kriseman circulated and tried to listen in on the various conversations. Kriseman said a social contract is the key to avoiding the problems that arose in Ferguson, Missouri.

Many of the conversations focused on humanizing police officers in the community. One suggestion is to develop a new cultural sensitivity and competency training for new recruits and a refresher training for veterans. Chief Holloway said he has started that process.

Even though there were few people under 21 at the event, there was a lot of talk about youth outreach. Former Pinellas deputy sheriff and current radio talk show host, Edie Darling said when she was young, a police officer came to her house to investigate a crime against her brothers. The officer made law enforcement feel like a team effort.

The Police Chief said that either in late May or early June the new implementations will be presented to the public.