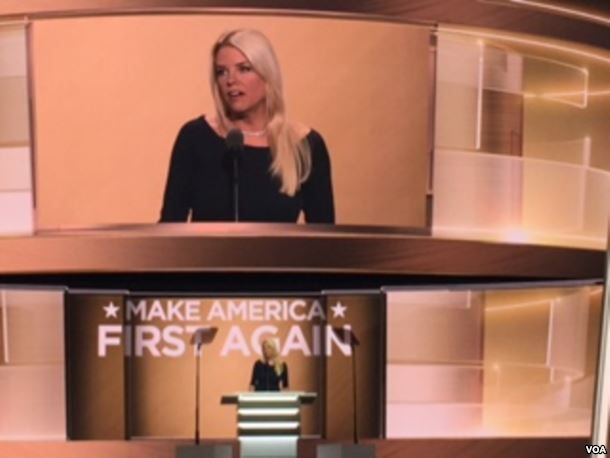 A southwest Florida prosecutor assigned by the governor to investigate a bribery complaint against President Donald Trump and Florida Attorney General Pam Bondi has found insufficient evidence to move forward.

The complaint stemmed from a $25,000 campaign contribution Bondi received from Trump in 2013. Bondi asked for the donation about the same time her office was being asked about a New York investigation of alleged fraud at Trump University. The investigation came after numerous complaints filed against Bondi.

Russell’s office concluded that there is no reasonable suspicion that Trump or Bondi broke Florida’s bribery law.

Host Rob Lorei interviewed Scott Maxwell, a columnist with the Orlando Sentinel, who has been investigating Bondi and Trump. Maxwell says the investigation into Bondi was not very thorough.

Dr. Gabriela D. Lemus discusses H.R. 1229, which would repeal the 2001 Authorization for Use of Military Force

As tensions grow between the U.S., Russia, Syria and North Korea, does the president have the power to bomb countries without renewing authorization from Congress?

The U.S. is prepared to launch a preemptive strike with conventional weapons against North Korea should officials become convinced that North Korea is about to follow through with a nuclear weapons test, multiple senior U.S. intelligence officials told NBC News.

North Korea has warned that a “big event” is near, and U.S. officials say signs point to a nuclear test that could come as early as this weekend.

The intelligence officials told NBC News that the U.S. has positioned two destroyers capable of shooting Tomahawk cruise missiles in the region, one just 300 miles from the North Korean nuclear test site.

American heavy bombers are also positioned in Guam to attack North Korea should it be necessary, and earlier this week, the Pentagon announced that the USS Carl Vinson aircraft carrier strike group was being diverted to the area.

The U.S. strike could include missiles and bombs, cyber and special operations on the ground.

The danger of such an attack by the U.S. is that it could provoke the volatile and unpredictable North Korean regime to launch its own blistering attack on its southern neighbor.

This comes in the wake of the dropping of a bomb on a suspected ISIS underground tunnel complex. The AP reports,

U.S. forces in Afghanistan on Thursday struck an Islamic State tunnel complex in eastern Afghanistan with “the mother of all bombs,” the largest non-nuclear weapon ever used in combat by the U.S. military, Pentagon officials said.

Her group said yesterday that it calls “for an immediate and urgent review of the 2001 Authorization for Use of Military Force (AUMF). Furthermore, we support Congresswoman Barbara Lee’s legislation, H.R. 1229, which would repeal the 2001 AUMF. The MOAB strike underscores the urgent need for such legislation.”

During the first half of the Obama Administration, Lemus served as Senior Advisor to the Secretary of Labor Hilda L. Solis and Director of the Office of Public Engagement from July 2009 until August 2013

To listen back to this interview from Friday, April 14 2017, click here.