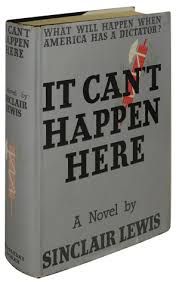 Recently several classic novels predicting a gloomy future and the possible emergence of fascism have shot up to near the top of the best seller list. The New York Times reports:

“Among the novels “The Handmaid’s Tale” is among several classic dystopian novels that seem to be resonating with readers at a moment of heightened anxiety about the state of American democracy. Sales have also risen drastically for George Orwell’s “Animal Farm” and “1984,” which shot to the top of Amazon’s best-seller list this week.
Other novels that today’s readers may not have picked up since high school but have landed on the list this week are Aldous Huxley’s 1932 novel, “Brave New World,” a futuristic dystopian story set in England in 2540; and Sinclair Lewis’s 1935 novel “It Can’t Happen Here,” a satire about a bellicose presidential candidate who runs on a populist platform in the United States but turns out to be a fascist demagogue. On Friday, “It Can’t Happen Here” was No. 9 on Amazon; “Brave New World” was No. 15.”

WMNF’s Radioactivity Tuesday’s guest was Dr. Sally Parry, executive director of the Sinclair Lewis Society.  We talked about Lewis’s novel “It Can’t happen Here”; what Lewis was warning against in 1930’s America, and how the novel foreshadowed the rise of Donald Trump.

The Washington Post’s non-fiction book critic Carlos Lozada wrote recently: “Sinclair Lewis’s “It Can’t Happen Here” (1935) features a populist Democratic senator named Berzelius “Buzz” Windrip who wins the White House in the late 1930s on a redistributionist platform — with a generous side order of racism — and quickly fashions a totalitarian regime purporting to speak for the nation’s Forgotten Men.

Salon has dubbed it “the novel that foreshadowed Donald Trump’s authoritarian appeal,” while Slate’s Jacob Weisberg writes that you can’t read the book today “without flashes of Trumpian recognition.”

You can listen back to the interview here.