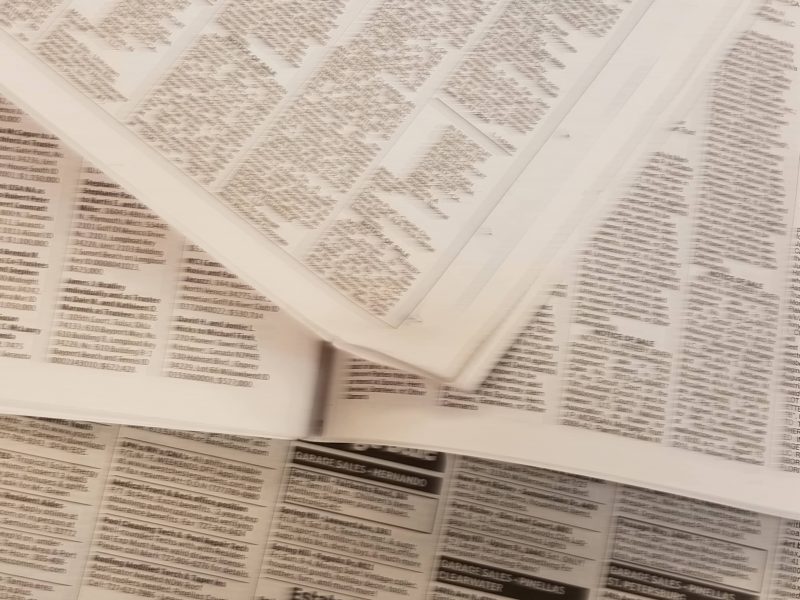 A Florida newsroom appears close to forming a union; reporters at The Ledger of Lakeland will vote soon on whether to unionize to help stem the tide of layoffs. This may be the first newsroom to unionize among Florida newspapers. Gary White has been a news reporter at The Ledger for almost 14 years; WMNF News spoke with him on Tuesday and Thursday of this week.

“Well, there’s been a dramatic change over the 14-years I’ve been at the paper. When I started, it was owned by The New York Times Company and I think we had almost 100 newsroom employees. At this point, I think we have 29 newsroom employees. The New York Times –we did have a series of layouts with the Times, the last few years before they sold the paper. The Times sold it to a group called Halifax Media and I think in the 3-years we were with Halifax, we didn’t have any layoffs. Since Gatehouse took over in January 2015, we counted up a total of 21 layoffs and we’ve also had several positions eliminated, after people left and those jobs just weren’t filled.”

What you’re describing is part of why you’re deciding to unionize. What’s that push been like?

“When we first started talking about it, there was the nervousness–none of us had been through this before. There was some concern about how the company might react, but, we just decided it’s kind of a desperate situation. We just had another round of layoffs–4 more people were laid off just a couple weeks ago and we’re at the point–we’re wondering if The Ledger really has a future as a viable news operation and we decided that this was our best bet to try to ensure that it does.”

The newspaper revenues have declined but, the publishers, they still need to make money and so they’ve often resorted to layoffs. I assume that kind of describes what’s happened at The Ledger. But, I want to ask you: how will forming a union help your position and the position of the newspaper to survive?

“We just have a concern that the approach Gatehouse is taking is putting the future of The Ledger in jeopardy. Mainly, in the sense that continued cutting of the staff causes the quality of the product to decline and that leads to declines of circulation. So, it’s kind of a downward spiral and that’s what we’re hoping to try to stop.”

I also want to ask you if you know of any other newsrooms in Florida — in the last few decades — that have unionized?

“As far as I know and from what I’ve been told, there have not been any newsrooms that have unionized. Their might be some papers that have had unions and maybe the production side, but, not newsrooms, as far as I’ve been told. This is kind of unprecedented.”

How is that unionization working right now? Are you close to getting enough people to join?

“Well, we just turned in the cards yesterday to trigger a vote. So, that’s supposed to happen within 20-40 days. We had, I think around 80% or so, turn in cards and potentially others could vote yes, who didn’t sign cards, saying they wanted to have a vote. So, yeah we’re confident that we have more than enough to create the union.”

“Yeah, we only need 50% and we decided early on we didn’t want to do this unless we were sure we had well over that number. So, it’s much higher than 50% of support we have.”

What’s been the response from management since they found out you were organizing?

“Well, they just found out yesterday [Monday] afternoon and as far as I know, there hasn’t been any official response, yet.”

Those are my only questions, is there anything else that people should know about this?

“As I said, we’re just concerned about the future of The Ledger. I mean, we all have our own self-interests, of course. We haven’t had raises in eight years and we’re hoping that we could, through collective bargaining, get pay increases. But, the main thing is we just want to try to have some influence over the future of the paper and make sure that it’s still around, because people of Polk County need to have a viable news operation.”