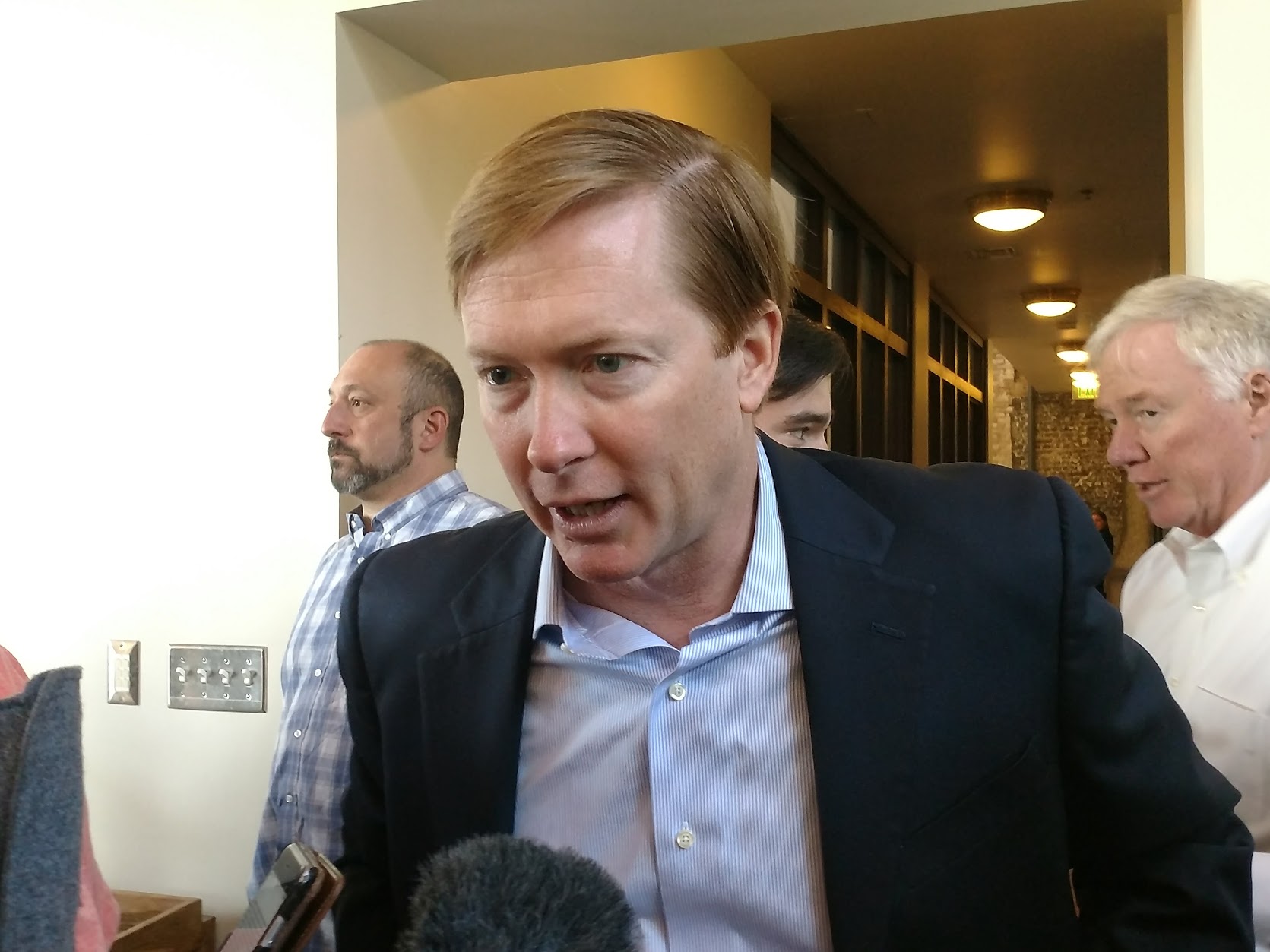 Speaking at the Kimmins Contracting Corporation in Ybor City on Friday, GOP gubernatorial candidate Adam Putnam pumped up the Trump tax reform plan, and boasted that Florida is a low-tax state.

The Putnam campaign had touted to reporters that the candidate would be making a “tax-related announcement”, but there was nothing new in his championing of the tax bill at his appearance at Kimmins.  He said the tax cuts in the GOP plan would save a family of four an average of $1,700, and was proud that it had been years without any serious discussion about raising taxes in the Sunshine State, compared to states like Illinois and California. His campaign later released a statement reiterating that is he is the first and  only gubernatorial candidate to sign the Taxpayer Protection Plan, a project of famed tax-cutter Grover Norquist’s Americans for Tax Reform (ATR).

Earlier, he appeared at the Oxford Exchange as part of the Cafe Con Tampa lecture series, where he appeared before one of the most liberal leaning crowds than he has appeared in front of his campaign, which he kicked off last May in his hometown of Bartow.

“NAFTA was devastating to Florida agriculture.,” he said, contending that as an example, the eastern Hillsborough County city of Ruskin has never been the same since the trade deal was consummated in the mid 1990’s. Putnam added that the Trump administration and Commerce Secretary Wilbur Ross have been “fantastic” to go to bat for Florida farmers needs.

While the issue of guns has dominated Florida politics over the past six weeks, Putnam was only asked a couple of times about the issue at Cafe Con Tampa. The Polk County native infamously touted last year that he was a “proud sellout” to the NRA last year, comments that some analysts believe could hurt him in the general election, where Democrats are now embracing gun control proposals following the Valentine’s Day massacre in Parkland. Putnam said that while he supported some provisions of the gun safety bill passed by the Legislature and signed by Governor Rick Scott last month, he disagreed with portions of the bill, specifically the part that raises the age of anyone to buy a gun in Florida from 18 to 21.

Accused Parkland shooter Nikolas Cruz accumulated a long list of disciplinary problems and mental health concerns. Putnam said that it was paramount that individuals with such documented troubles shouldn’t ever get access to firearms.

“We’ve got a lot more work to do there to make sure that we are keeping guns out of the hands out of people who are not going to use them safely and responsibly,” he said, adding that there was room for a “thoughtful conversation.” But he emphasized that there should be a distinction between law-abiding firearms owners and those who are mentally unfit.

“If you design gun control laws around every single incident, then how are you going to have any protections?” he asked.

Samantha Pollera, then tried to follow up by asking if he still considered himself an NRA sellout, but he ignored the question.

Florida law also bans local governments from implementing gun-control measures, a law that has frustrated some of the state’s big-city mayors like Rick Kriseman and Bob Buckhorn.

Elizabeth Corwin, a member of the gun-control group Moms Demand Action, said that Putnam has said earlier about entrusting local communities with more power when it comes to education. Why did he believe differently when it came to guns, she asked?

“If you have something under your seat driving down I-75 or driving down I-95, and there are a series of changes in the law, are you creating a situation where someone is unknowingly or wittingly violating the law without having done anything else in an affirmative way,” Putnam said. “That is the concern that there ought to be some consistency in what those gun control measures are.”

Putnam is in a very competitive race for the gubernatorial nomination with Ponte Vedra Beach Representative Ron DeSantis, with Speaker of the House Richard Corcoran scheduled to join the race later this month.

When he appeared before a Cafe Con Tampa crowd last summer, Corcoran actually said that in many cases, Tallahassee, and not local governments, knew best in serving Floridians. Speaking to reporters afterwards, Putnam rejected that premise.

“I think that local elected officials are closer to their constituents. They seem them at Publix, see em’ at the post office, see ’em at the Kiwanis club, and they have a very good finger on the pulse of their community that they represent.”

Putnam again criticized U.S. District Judge Mark Walker for his language in striking down the state’s system of requiring that ex-felons wait five years before coming before the Cabinet to seek to restore their voting rights. Walker called the system “fatally flawed” and called on Putnam, Scott and the two other members of the Cabinet – Attorney General Pam Bondi and CFO Jimmy Patronis – to replace the system by April 26.  Earlier this week, Walker turned down a request from Bondi that the case be stayed while the state appeals an earlier decision by him.

On marijuana, Putnam said that if elected, he would faithfully implement the medical marijuana laws that have been slow walked by the state’s Dept. of Health agency. But he is vehemently opposed to legalizing recreational pot, which advocates say they will push to get on the 2020 ballot.

But DeSantis has proven to be extremely competitive in the polls. Putnam took a shot at him when asked if he agreed with his gubernatorial opponent’s call this week to hold a Congressional hearing on the “caravan” of migrants fleeing violence in Central America.

“Washington’s not going to solve Florida’s problems,” he snapped. “The next governor of Florida needs to be someone who knows Florida (and) can get around Florida without a map and a GPS, understands the diversity of our state and how to bring people together to make our economy more diverse, our jobs higher paying and our schools more competitive.”