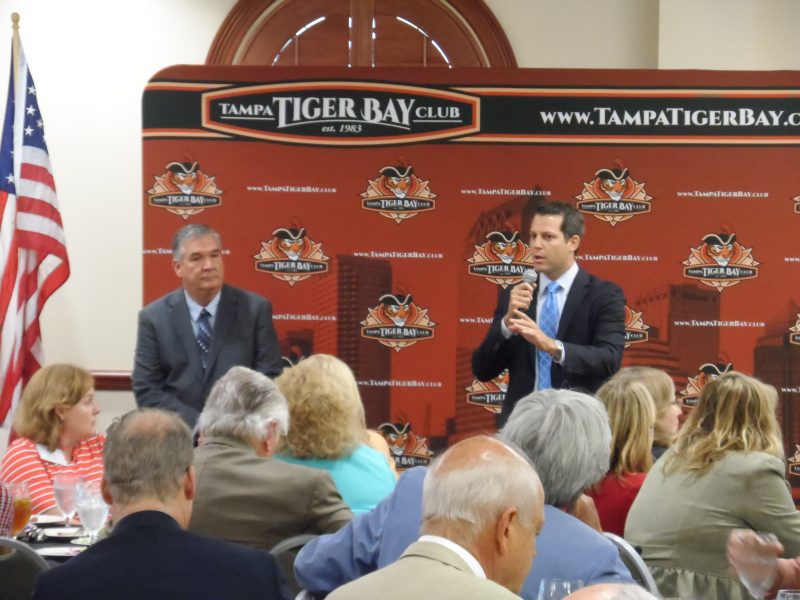 We look in detail at another election race: Republican Hillsborough County State Attorney Mark Ober is facing a challenge from former federal prosecutor Andrew Warren, a Democrat. We hear parts of a debate from earlier this month at the Tampa Tiger Bay Club.

Earlier this month we played two clips from this debate that involve how important someone’s wealth is if they get caught up in the justice system and Warren seeming to accuse Ober of playing politics with his office.

There’s more controversy from that debate as well.

We hear a question from attorney Jeanne Coleman. In his answer Andrew Warren accuses Ober’s office of botching a sex crime case in which the local victim was a minor and Ober suggests the victim consented.

In another question former state CFO Alex Sink cites recent studies by Harvard Law School and Human Rights Watch that suggest that Ober’s office may be an outlier in Florida and in the nation when it comes to charging juveniles as adults as well as in seeking the death penalty.

Mark Ober has recused himself from two high-profile cases recently because of relationships with people being investigated. Ober wants a different prosecutor to look into a complaint that Donald Trump may have bribed Florida Attorney General Pam Bondi. Ober says he supervised Bondi for nine years and is a personal friend. In addition Ober recused himself from investigating a Hillsborough Sheriff’s deputy who shot an unarmed black man, Levonia Riggins, this month. Ober says he is socially connected to the family of Deputy Caleb Johnson, the nephew of former Hillsborough County Supervisor of Elections Buddy Johnson.

At the forum before these recent recusals, Ober was asked by Elizabeth Belcher why he did not recuse himself from an investigation into a contract between Hillsborough County and the firm Parsons Brinckerhoff for engineering work with the proposed transportation project called Go Hillsborough.

Lynn Gray, who is running for a county-wide school board seat also asked a question about “broken-windows” policing.

We also hear questions critical of Andrew Warren in a case he abandoned as a federal prosecutor to run for state attorney. And whether there should be a citizen board to review prosecutors.

Listen to the full forum here: