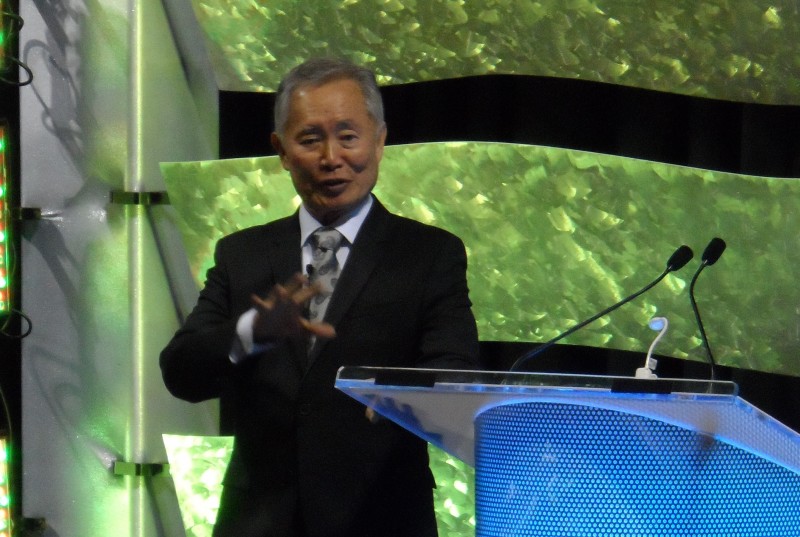 Star Trek actor and social media star George Takei is telling USF students to pursue social justice activism; in an hour-plus speech at the Sun Dome on the Tampa campus of the University of South Florida Monday night, Takei chronicled his life from the Japanese internment camps of his youth to struggling for LGBT rights later in life. He even touched on the current race for president.

Listen to the whole story here (video is below) …

The actor who played Mr. Sulu told students it’s up to them to fight for peace and equality in order to strive for the pluralistic future envisioned by Star Trek.

“Gene Roddenberry, the creator of Star Trek, often reminded us that the Starship Enterprise was a metaphor for Starship Earth. And the strength of this starship lay in its diversity. Coming together and working in concert as a team. The diversity of all this planet. People of different races, different cultures, different faiths, different experiences, different orientations, all coming together and contributing the best that they can to that team, so that it can move forward and move on to new challenges.”

Takei’s diversity on the TV show was playing the character from East Asia. In real life he and his family were rounded up during World War II for being different. And in his pre-teens, Takei realized he was different in another way: he was gay.

In the audience, Courtney says she identifies as part of the LGBT community and appreciates Takei’s struggles growing up, realizing he’s different and deciding to fight for change. She is in grad school in medical sciences, she asked that her last name not be used.

“You’re afraid to let other people know that you feel this way. It creates such a disconnect between you and other people. And I think, now that things are getting better, we can actually say, ‘Hey, yes, I identify as this.’ I have great optimism about the future.”

Takei says that optimism is why Star Trek has become such a long-lasting phenomenon.

“We look to the future with optimism and with confidence in our problem-solving capabilities. And certainly, our gifts for invention and innovation and our spirit of enterprise and exploration.

“Those are important human qualities that we’ve said: ‘If we have confidence in them and face each problem – each challenge we face – with those abilities that we have, then we can move on to the next chapter.'”

Takei took on the current presidential race. To cheers, he said he hopes Hillary Clinton will become the first female president. He also acknowledged to applause that supporters of Bernie Sanders are ‘intensely motivated.’

Only the first five minutes of Takei’s speech was allowed to be recorded.

Some students there, like Brian Hattab, had hoped Takei would touch on politics. He is a junior in mass communications.

“What his thoughts on the election are, just politics in general. Stuff like that, you know, the goings on in the world around him.

“I was reading an article in the [Tampa Bay] Times over the weekend talking about his parents and the stuff they went through when the, I believe WWII and being Asian and all that. So, I’m interested in seeing what he has to say, in terms of, trying to compare what certain candidates – not going to name names – are talking about.”

Hattab got what he wished. When Takei reminded the audience that the vast majority of Muslims are not terrorists, he didn’t name Donald Trump. But it was clear that’s who Takei was talking about when he said, ‘He can make irresponsible sweeping generalizations.’ And, ‘I know what that’s like. I hear echoes of the 1940s.’ 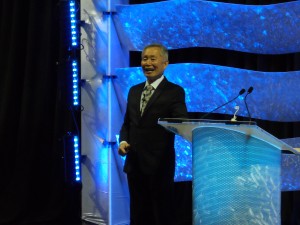 George Takei at the University of South Florida, Tampa. By Seán Kinane (18 April 2016).

Takei’s early activism was around justice for his fellow victims of the World War II internment camps, helping Adlai Stephenson’s presidential campaign, marching for civil rights with MLK and demonstrating against the Vietnam War. But until the last decade or so he was silent on LGBT issues. That all changed when he felt betrayed by Governor Arnold Schwarzenegger’s veto of a same-sex marriage bill passed by the California legislature.

Rebecca is a senior majoring in computer science and did not want to give her last name.

“He’s a big advocate for the LGBTQ community and I really wanted to hear about that as well.”

Takei compared the struggle for LGBT rights to his childhood when he was interned by Americans armed with machine guns, while in more recent times ‘gays and lesbians were contained by legalistic barbed wire.’ Takei decries the backlash against LGBT rights like laws in Indiana and Arkansas. He says it’s just ‘prejudice and ignorance cloaked in religious freedom.’ And now in North Carolina, ‘the battlefield this time is the bathroom. Who knew the Bible said anything about toilets?’ Takei quipped.

Like many of the other students in the audience, Judy Chen appreciates Takei’s activism. She’s a second-year student in medical technology.

“He is very politically outspoken and I just thought it would be very interesting to see him.”

Takei criticized Republicans in the U.S. Senate for not holding hearings on President Obama’s Supreme Court nomination. He calls it a ‘dereliction of their duty; what are they doing collecting their paychecks?’

Here’s video of the first five minutes, which is all that was allowed to be recorded: