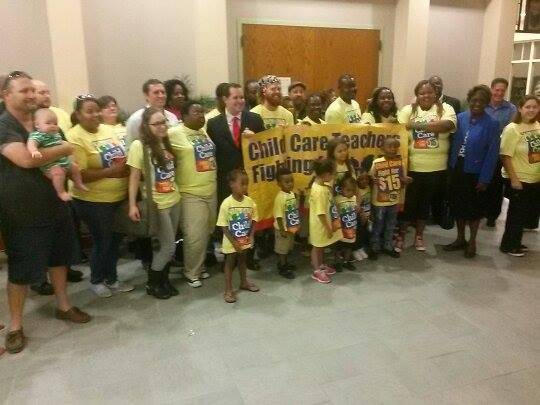 Last night local elected officials and minimum wage advocates met at the Seminole Heights Library in Tampa for a dialogue on the poverty-level wages of childcare workers.

The town hall meeting was held by the local fight for 15 chapter, which is part of a national movement for a 15 an hour minimum wage. The discussion focused on the low earnings of child care workers, who on average earn of 9.74 an hour according to labor statistics.

Demetria Atkins, who has been in the industry for 27 years, says this is not enough for work that is so crucial to childhood development.

“Daycare teachers and the educators, we have your children at the vulnerable part, from zero to five is when they are at the their peak of learning, and exposing and just growing. So for us, we are the key before your child actually gets into the school system. ”

Nadaije Pail Jajoute is a child care worker who earns for 8.05 an hour without benefits. She says she struggles to maintain housing.

“I’m unable to get a place to live, basically I’m homeless. So for me its not feasible that I care for a child daily, but I am unable to care for myself once I get out of work.”

Kelly Benjamin with Fight for 15 says the group will continue to hold month meetings throughout the area.