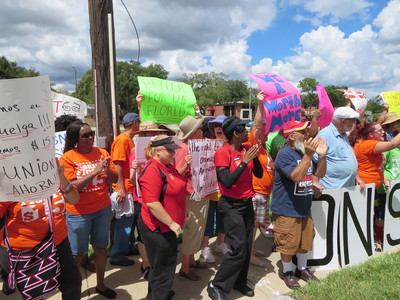 Fast food workers are striking Thursday across the nation demanding a minimum wage of fifteen dollars an hour; here in the Tampa area, nearly 100 supporters chanted on the sidewalk in front of a McDonald’s restaurant at the corner of 56th Street and Fowler Avenue in Temple Terrace.

At one point the protesters sat in the intersection blocking traffic for 5 minutes until they were confronted by police and ask to move. WMNF spoke with some of the striking workers. That includes McDonald’s employee who gave her name as Mandy. She walked out on her shift and joined the picket line.

But becoming a manager is not necessarily the answer. Anthony Moore works at a nearby Burger King.

A spokesperson for McDonald’s refused to be interviewed on tape. Instead, they issued an email statement, which reads:

“At McDonald’s we respect everyone’s rights to peacefully protest. The topic of minimum wage goes well beyond McDonald’s- it affects our country’s entire workforce. McDonald’s and our independent franchisees support paying our valued employees fair wages aligned with a competitive marketplace. We believe that any minimum wage increase should be implemented over time so that the impact on owners of small and medium-sized businesses – like the ones who own and operate the majority of our restaurants – is manageable. Additionally, we believe that any increase needs to be considered in a broad context, one that considers, for example, the impact of the Affordable Care Act and its definition of “full time” employment, as well as the treatment, from a tax perspective, of investments made by businesses owners.”

“It’s important to know approximately 90% of our U.S. restaurants are independently owned and operated by franchisees who set wages according to job level and local and federal laws. McDonald’s does not determine wages set by our more than 3,000 U.S. franchisees.”

Here are some photos of the Fast Food Strike.