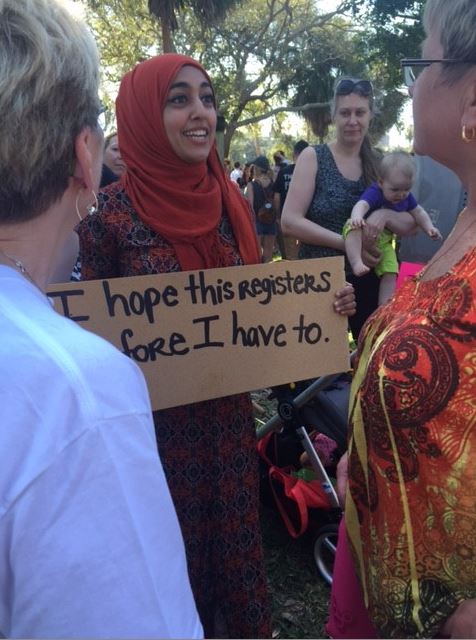 The 2016 election didn’t just bring a new administration into the White House or spark new energy in the building progressive protest movement. Apps and websites have been springing up to help people get their resistance on. Many of them are built by people in their late teens or early 20s, which might be an interesting harbinger of things to come. Here are a few of the latest.

5 Calls gives you a list of topics you might care about. If you put your zip code in, and pick an issue, the site provides some background to the situation, the phone number of the politician you could call, and a script. After you have made the call, you can click what happened (unavailable, left voicemail, made contact) or you can skip to the next person on the list. The website and the app seem to work almost exactly the same.

GQ called this 3 year old website Tinder, but for Unsexy Congressional Bills.  You do indeed get a yes or a no choice, with summaries of each position. Parts of the website are really outdated, but the issues are very current.

The Countable website and app are significantly different in that the app requires you to sign up, and the website doesn’t. The content is the same, though the app allows you to check off which subjects matter the most to you, and your feed reflects that. Same if you log into the website. An interesting function the website provides is an embeddable version of Countable, so you can put it on a website and that would allow visitors to take action through your website. If you don’t have a website, they have a link that you can send which can be your own advocacy web page.

Tarjimly will be providing translation for people in need of it. Both the user and translator are anonymous (just first names) to each other, though to use it you register through the Tarjimly website. This way people who are not fluent in a language that they need to use can get help. This brand new app is still building its translator data base, and should be released soon. So if a woman with a sick child is in the emergency room, but only knows Urdu, a translator can help her speak in real time to the staff.

DoNotPay gained notoriety as an app that successfully fought parking tickets, but is now helping people applying for asylum navigate the paperwork they need to fill out to enter the UK, Canada, or the US. Called a ‘robot lawyer’, it takes the user through the application process step by step, and also determines whether the user can get asylum. Right now the UK based app is only in English, but expanding the available languages is in the works. Maybe it can team up with Tarjimly.

The origin story is that this app was made in response to President Trump’s threat to defund Berkeley because of the violent protesters raging against a Breitbart writer. What do Berkeley students do when the president angers them? They create an app that notifies the users every time there is an official action at the White House. It monitors the WH website to report every ten minutes on every Executive Order, Memorandum, Proclamation or any official anything. I don’t think it reports the tweets, but you can then tweet out the information you get. No filter, no interpretation: just the actual verbiage.

Regular citizens have been acting as photojournalists for years (the Zapruder films and of the Rodney King beating for example), but

the advent of smart phone cameras has amped it up. Videos taken by regular people have changed national, even international, conversations about police brutality (whether in NYC or Cairo), environmental destruction, race relations, and so much more.

Newslinn hooks people who are in the middle of a news story up with local journalists, so their photos can be used to give additional perspectives on a story or event. Verified journalists from all over the world are registered, and photos go through a location verification system, (among other things) to ensure the system isn’t being gamed with fake news. App & website, but more app-focused. I wonder if WMNF journalists are on it!

Storyful also has a verification system, finding videos that are newsworthy and making sure they are legit, then helping them go viral. This website (no app) is the heritage one in this whole post, born in 2010. It doesn’t only do political or protest videos (there are A LOT of animal videos on it) but it has been used by news and advocacy organizations to great effect.

This website is simple. It helps you write all of your representatives in Congress all at once instead of having to do it separately. All of these apps and sites are easy, but this one is ridiculously easy. And if you combine some of the information from the other sites, and use Democracy.io, you could be part of changing the world for the better.