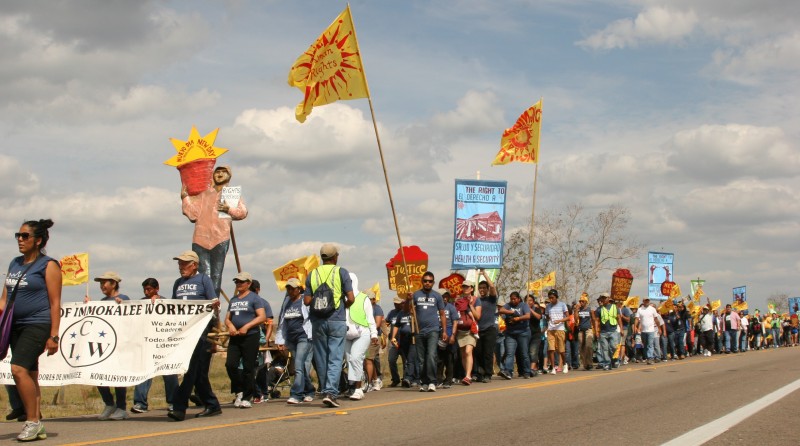 In the aftermath of Hurricane Irma, we hear how the migrant farming community of the Coalition of Immokalee Workers has been affected; and we hear from Tampa Bay residents upset at their power companies. We took phone calls; our guests was Roger Butterfield of the Student Farmworker Alliance.

From the website of the CIW, Coalition of Immokalee Workers:

“When Hurricane Irma ripped through Florida, farmworker families throughout the state moved into survival mode. Those who could hurriedly packed suitcases with their most precious belongings and headed north, most with no particular destination, in search of a safe place out of the storm’s path. Most, however, had no choice but to stay home, seeking the safest place to ride out the hurricane, be it their bathroom, a nearby church, or one of the many shelters opened by each Florida county. Over one long night this past Sunday, Irma darkened millions of homes and businesses (affecting over half of the state’s population of 20 million people), caused billions of dollars in property damage, and took 26 lives in Florida as of this posting.

“Over the past several days, the Immokalee community – which, along with other already impoverished farmworker communities in Southwest Florida, took Irma’s hardest punch, delivered by the fierce winds and torrential rains of the hurricane eye wall’s northeast quadrant – has slowly emerged from survival mode and has begun to look ahead to a recovery and rebuilding process that will take months, if not years, to complete.”

We talked about what it’s like in the migrant farming communities of southwest Florida before, during and after Hurricane Irma. And about relief efforts.

Live: How did Coalition of Immokalee Workers @ciw fare during & after Hurricane #Irma?

“This is a grassroots coalition of affinity groups and organizations preparing for and responding to Hurricane Irma. Much of the groundwork was laid by Mutual Aid Disaster Relief, with assistance from Food Not Bombs chapters, Earth First! DSA, Black Lives Matter Tampa, Love Has No Borders,Tampa Bay Dream Defenders, The Refuge, Suncoast Antifa, Hillsborough Community Protection Coalition, Organize Now, Florida POCA clinics, and many others. Irma Decentralized Response is less a “group” than it is a decentralized network and cluster of groups and individuals whose aim is to facilitate autonomous responses. It is accessible to anyone who is interested in assisting with providing decentralized and liberatory relief to communities affected by Irma. Solidarity not charity! We are non-hierarchical, meaning there are no leaders. We are all leaders. A network model is actually much more efficient and effective in disaster relief than the top-down command and control model. For the street medic Irma response efforts visit”