Home Blog A year ago, after the Women’s March in Washington DC 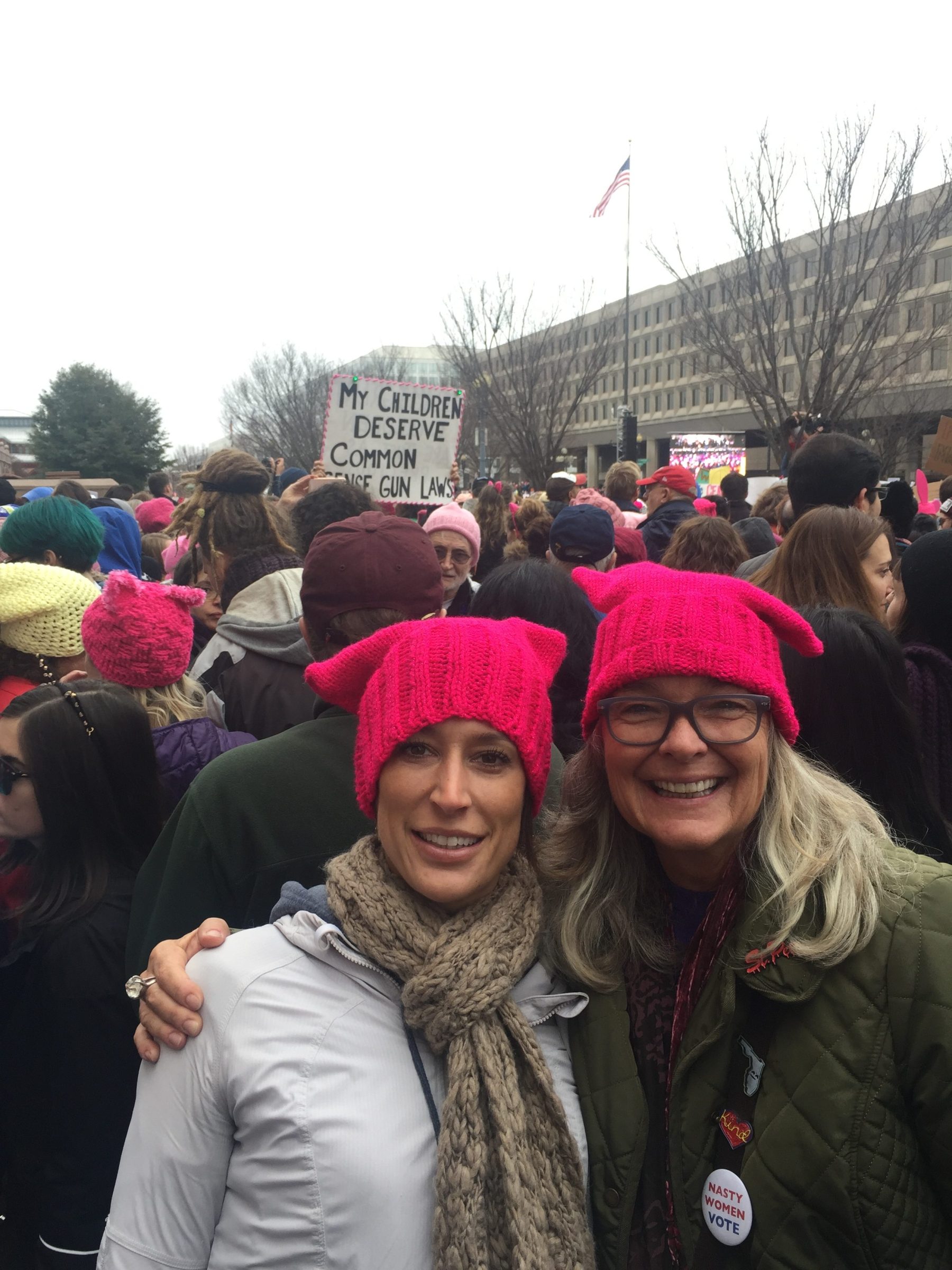 Laura Keane is an author, and owner of Classical Medicine in St. Petersburg. This is a previously published account of the aftermath of the Women’s March last year. There will be a Women’s Day of Action in St. Petersburg on the one year anniversary of the largest demonstration in US history.  There is more information here about other actions/marches. ~ed.

By the end of the Women’s March on Washington, Kelly and I were as drained as our phones. It took over an hour to move a few blocks beyond the Mall, onto sidewalks where we could step rather than inch. Chasing the bus we didn’t catch, we wondered about Uber. First, we had to find electricity.

A fancy hotel on Connecticut Avenue beckoned. In the elegant lobby, Kelly eagle-eyed an empty power strip beneath a lamp in a sitting area. There was a group assembled but no phones were plugged in. Kelly volunteered to dare the bar, already three people thick. I settled on a footstool, turning away from the group whose private camaraderie we had violated.

On the closest end of the couch sat a young couple and a woman who had to be her mother. On the snowy fourth finger of the daughter’s left hand, a starter diamond reflected every glimmer from the lobby’s stalactite crystal chandeliers. Someday, she would have a diamond like her mother’s, square and chunky with an army of support diamonds guarding the perimeter. Her earnest intended sat ramrod straight in a dark suit and a red tie, his starched white shirt fresh at dusk.

Beyond this threesome was a man who looked like an amalgam of several cable TV opinion anchors: steely gray hair; patrician thin lips, void of color, the top one permanently lifted in faint sneer; pale blue eyes. As the couch turned the corner, an elfin woman with white blonde hair perched beside a man who looked like an academic outsider, perhaps a think tank someone. His dark coloring made him stand out in the group but he was one of them tonight, proof they could never be called names by the likes of me. Look: here’s our different-colored friend. He has a beautiful white girlfriend. He’s one of the good ones.

Another man approached and leaned down to be introduced. The buttons on his starched purple shirt strained against their burden; at his wrists, gold secured French cuffs. “Spent the afternoon at the embassy,” he announced a tad too casually. The Blonde asked which one.  “Hungary,” he said with a toss of his chins. “Talked to the Ambassador,” he added to his Cable Anchor friend. Their exchange sank to murmurs.

I was trying not to strain for every word when I heard the Blonde ask about a city they named. “My grandfather was in a camp there,” she volunteered. That caught Purple Shirt’s attention.

“Really?” He craned his neck to look at her. He sounded puzzled. “Why?”

It was involuntary: I turned and stared. Which is why I saw the Blonde lift her fishbowl green-blues to meet his gaze. “Jewish?” she shrugged. The shoulders of her cream-colored cable knit sweater rose a fraction. The ghost of a smile pulled on her lips.

My jaw dropped. Purple Shirt stammered to recover. “Of course,” he tutted as he directed his remarks past her. The Blonde saw me and smothered a giggle. I shook my head. Still high from the march, I was desperate to reach her. In that arcing moment, we had communion, solidified by suppressed laughter.

But I pushed too far. I wagged my head and rolled my eyes too explicitly. The Blonde went from swallowing her giggles to ignoring me in less than a minute. Her boyfriend may or may not have elbowed her.

When their conversation ebbed, the Cable Anchor tossed chum lines to bait me into reaction. He started with “Obama,” (he had that sneering way of drawing out each vowel) “was the worst president in history. Cost me a lot of money.”

He tried again. “We went to see about that march today. Most vulgar thing ever. Those hats. Those signs.”

I wish I had thought to joke, “Guess you’re more of a dog person.” Instead, thinking about the 80 year-old friend who pressed two hats into my hands and said with tears in her eyes, “I can’t be there but you and Kelly can wear my pussy hats,” I pulled off my hat and stuffed it in my coat pocket. Holding out empty hands, I taunted back with the sophistication of a four-year-old, “I don’t have any signs.”

Our uneasy detente resumed until I heard him make a vile comment in reference to “snowflakes.” On its own accord, my body whirled. “Listen,” my finger was out and pointing, “do you know the etymology of that word?”

I had read about this on a website that I didn’t yet know to question. The Fake News phenomenon hit left and right, regressive and progressive alike. So maybe my certainty of the derivation was unfounded. But on Saturday, January 21, 2017, I was convinced I was correct. And since I didn’t believe he knew, I continued my lecture. “That’s what the guards at the camps called the ash from the ovens. Snowflakes. You may mean to insult people like me, and I can take it. But you might insult people you don’t mean to.” Here I made a pointed visual reference to the Blonde, whose cheeks were flaming as she stared at the toes of her flat leather boots.

Before Cable Anchor could retort, the Ernest Young Man interjected, “If you’re going to argue politics, we’re leaving.” He reached for his bride-to-be, his hand closing over the diamond he chose for clarity since he couldn’t also afford carets. In the form of his threat was the excuse to disengage. But in place of resolution, the daggers and bullets were frozen in space, bile and frustration swallowed by both sides in equal measure.

We’re in this together

My phone got enough juice to call my sister to say we were running late for dinner. After pulling on my claustrophobic cold weather gear, I couldn’t leave without one last try. Hands on hips, I went face to face him. “I own two businesses,” I started and damn if my lower lip didn’t start to quiver and my voice shake. I always cried in corporate America when I was furious. A weakness then and now.

“Good for you,” he responded. Silky. Patronizing.

“And we are ALL Americans. For the moment, that means we ALL have EQUAL rights.” Not technically correct, since I’m female, but I’m five generations on this soil. Damn if he’s going to out patrician me.

This was going nowhere and Kelly and I had places to go. We turned and strode towards the gold doors with polished doormen who bid us a good night from the Mayflower Hotel.

The Mayflower. Of course.

Everything worth talking about in D.C. happens at the Mayflower.