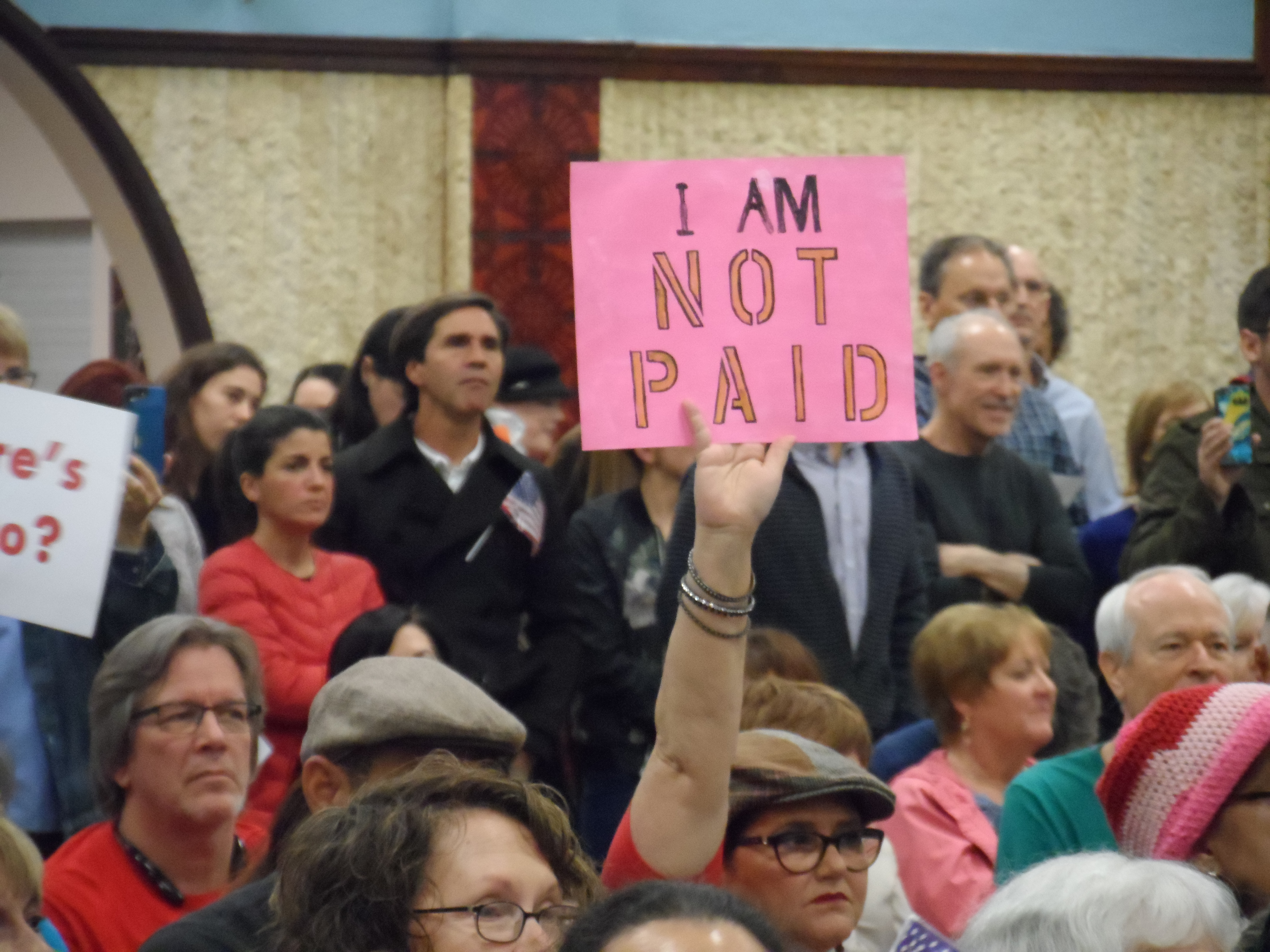 An overflow crowd of more than 500 packed the Tampa Letter Carriers Hall in West Tampa Wednesday night for a town hall meeting to support the Affordable Care Act, action on climate change and other issues. About 50 people spoke out. They addressed their concerns to an empty chair reserved for Senator Marco Rubio, who was a no-show.

Margie Friedman was born in Canada but she is now a naturalized American citizen. She implored Senator Rubio to keep the Affordable Care Act because she’s one of 2.2 million Floridians who rely on it for health insurance.

“We will lose consumer protections because of the things they’re proposing. We’re not gonna have the pre-existing condition clause, the way it is now. They’re gonna start charging, probably women more than men, like they did before. [crowd boos] And they’re gonna limit your lifetime coverage all because you won’t give America, citizens and all, healthcare.

“Will you commit? I want you to commit tonight, wherever you are, to preserving ACA and alter those changes they’re trying to make to it. That’s all I ask.”

Michalelangelo Salcedo from Port Richey wore a pink bandana on his head in solidarity with woman activists.

“Because the women of this country showed us the way, the day after inauguration. My mama, my sister, my nieces, and all of you women: go! Go, girl!

“Okay. I also would like to make a public announcement that I am not a paid demonstrator. As a matter of fact, I have three wonderful friends staying with me; they came with me, too and I did not have to pay them or even buy them a coffee.

I am not scolding him. I’m not admonishing him, but, I’m saying to him, in those quiet moments when you’re thinking about our country, my advice to you is ask yourself: “In this predicament that we’re in today, what would Jesus do?” And this predicament that we are in today, what would Jesus say to our unfortunate immigrants; to those who’ve had their tombstones of their parents or relatives thrown over in a cemetery; to those who have had their mosques defiled; to those who are called “rapists” and “criminals”; to those who have no healthcare?

“Though, we are the richest nation in the world, all the other industrialized countries have health coverage for their citizens and we claim we can’t afford it.”

Video is below. You can listen to the audio of the full town hall here.

Others spoke out against Russian interference in the election and used the social media hashtag #WheresMarco to express anger at the Senator for not being at the town hall meeting. On his Facebook page Rubio said he was in Europe.

Tom Dunn from St. Petersburg and his wife wanted to tell their senator to keep the Affordable Care Act.

“So, both my wife and I feel that our daughter’s life has been saved through the Affordable Care Act.”

Couldn’t you have afforded it, maybe some other way, like private insurance? How would that have been different?

“Well, she had been an excellent school teacher, had insurance, but, she wasn’t feeling well. So, she felt she needed to resign, which she did. When she resigned, she didn’t have insurance and thank goodness the Affordable Care Act was there. She signed up immediately. If she hadn’t of had the Affordable Care Act, she would have probably never have had the testing which would have revealed that she had a terminable form of cancer, unless treated early. So, we feel that the Affordable Care Act saved her life and maybe it’s got some problems, but, I say let’s fix it or come up with something better and people, like our daughter–who’s been a real credit to society, in our opinion, her life has been saved and I think people like her–have lives that are worth saving.”

Senator Rubio is not here, how do you feel about that?

“Well, I would say Rubio, Rubio, where for art thou? You need to be here to listen to your constituents and find out what their needs are and what is on their mind, instead of living in a bubble in Washington or running off to Europe.”

Faithe Estes said it’s more difficult to make ends meet in the U.S. than when she lived in Europe.

“I obtained a Masters Degree that was paid for by the Spanish government, in exchange for teaching at their schools. I lived in countries that valued education. I used Universal Healthcare and received the highest quality of care. I saw my doctors when I needed to and without fear of medical bills. My doctors spent time with me and I never suffered the additional burden of weeding through bills and stressing about whether or not I could afford them.

“I lived as a foreigner and was welcomed and accepted in the communities in which I lived in. I was thanked for the service I provided and even though I did not speak the language, people were patient and they were kind to me.

“And then I returned to my home country, that I love dearly. A country that my grandparents fought to protect and I am disheartened. I had to give up my beloved profession of teaching because I cannot afford to live on a teacher’s salary. I tried teaching as an adjunct for a year while working full time waiting tables, but, that wasn’t enough. The stress was too much and the economic burden was too high.

“I needed dental care, so I flew to Mexico, twice, because it was a tenth of the cost it was here. I received quality care and would do it again.

“A friend of mine’s life was saved because he had insurance through the Affordable Care Act a.k.a. Obamacare. He had Obamacare when the doctors discovered the cancer. And if the pre-existing condition provision is removed and the cancer returns? I will encourage him to leave the country for care, as it may his only option for survival.”

The town hall was organized in part by Melissa Gallagher with the new Indivisible Movement.

“I hope that, Marco, you are watching and that your team is watching – ‘Hi everybody’ – because Tampa, we want a town hall with you, Marco Rubio. And we are not going to stop until you come here.”

Watch the full town hall meeting (in five parts) below:

Chanting before the meeting: